I received an epistle from the South African Labour Guide yesterday. It was on the subject of polygraph testing and began:

Employers are often faced with dishonest or criminal activities such as misappropriation of property or theft in its work environment, without knowing exactly where, how and by whom it was committed. It is crippling the business and the employer is at its wits-end to find the culprits or wants to know: “Can I send all my employees for a polygraph test and if so, what can I do if they fail?”

It then went on, in answering this question, to miss the point entirely: it didn’t even touch on the scientific validity of polygraph testing. To be fair, the Labour Guide is a guide to labour law, and does not use objective truth as its yardstick; but I would still expect it at least to touch upon one of the best defences against polygraph evidence–that it is pseudoscientific nonsense that has been thoroughly discredited, and whose use should be illegal. It might be instructive to look at how it is supposed to work. 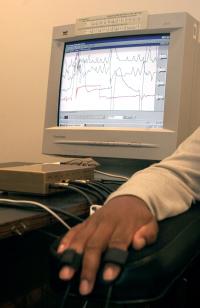 The victim is attached to various wires which connect to a machine that measures heart rate, blood pressure, respiration and skin conductivity. The interrogator will then follow one of two techniques: the control question test (CQT) or the relevant/irrelevant test (RIT). In the IRT the inquisitor will ask irrelevant questions (is your name Fred?), interspersed with relevant questions about which the test is really being conducted (did you plant the bomb?). If the lies (or truth) told in response to the irrelevant show the same physiological responses as those for the relevant questions, then the subject passes the test. The CQT is similar, but additional irrelevant questions are posed that will most probably result in a lie (have you ever lied to avoid trouble?). The assumption is that everyone has lied at some stage in the past, and that if the victim replies to this question in the negative he is lying, which will allow the operator to compare the physiological response to this ‘known lie’ with answers to the relevant questions.

Obvious objections to these techniques are immediately apparent. Suspects know what they are suspected of, so they won’t be emotionally invested in the irrelevant questions, but they will show an emotional response to the ‘real’ question, whether or not they answer truthfully; the CQT relies on the assumption that a lie has been told in response to the control questions when this might not be the case; there are numerous ways to produce changes in the physiological parameters being measured apart from lying; there are no objective criteria for the physiological changes that may be expected when a person is telling a lie; and there is no statistical model for the efficacy of the technique–in DNA testing, for example, an expert could say with confidence that there are odds of x in x million that there could be a false positive match.

Polygraphists have failed to answer these objections. The tests are based on the subjective opinion of the tester, and as such have no place in a court of law. In jurisdictions which still have trial by jury, this is doubly unfair because juries are composed of people who probably have no training in critical thinking and will accept the word of a so-called expert without question.

There have been many scientific investigations into the accuracy of polygraph results that show that they are inaccurate, or that their accuracy cannot be determined. Here are some examples:

From Science and the CQT polygraph: A Theoretical Critique by Leonard Saxe

Polygraph tests do not assess deceptiveness, but rather are situations designed to elicit and assess fear. Correct decisions may be obtained when subjects fear detection; however, because there is no way to determine the cause of a subject’s fear or anxiety, validation is impossible. The paper also considers other physiological detection paradigms and concludes that because of the nature of honesty their use to detect deception is unlikely.

From Forensic “Lie Detection”: Procedures Without Scientific Basis by William Iacono, published in the Journal of Forensic Psychology Practice

Although the CQT may be useful as an investigative aid and tool to induce confessions, it does not pass muster as a scientifically credible test. CQT theory is based on naive, implausible assumptions indicating (a) that it is biased against innocent individuals and (b) that it can be beaten simply by artificially augmenting responses to control questions. Although it is not possible to adequately assess the error rate of the CQT, both of these conclusions are supported by published research findings in the best social science journals (Honts et al., 1994; Horvath, 1977; Kleinmuntz & Szucko, 1984; Patrick & Iacono, 1991). Although defense attorneys often attempt to have the results of friendly CQTs admitted as evidence in court, there is no evidence supporting their validity and ample reason to doubt it. Members of scientific organizations who have the requisite background to evaluate the CQT are overwhelmingly skeptical of the claims made by polygraph proponents.

If anyone wants you to undergo a polygraph test, whether it is an employer or a law enforcement agency, the best advice is simply to refuse on the grounds that it has no scientific basis and that it is more likely to incriminate the innocent than to exculpate the guilty. Unless you are unfortunate enough to live in an unenlightened jurisdiction (in which case the polygraph would most likely be irrelevant, anyway) you cannot be forced to take the test, and your refusal cannot be used as an indication of your guilt.

This entry was posted on Thursday, March 1st, 2012 at 15:34 and is filed under Law, Science. You can follow any responses to this entry through the RSS 2.0 feed. You can leave a response, or trackback from your own site.