Enterprising chaps, the Nigerians. It seems that they have the monopoly on the informal pharmacology trade in South Africa; but it is the 419 scamsters of whom I wish to speak today. Some of them have moved their base of operations to other countries, and are operating local versions of scams in those countries. 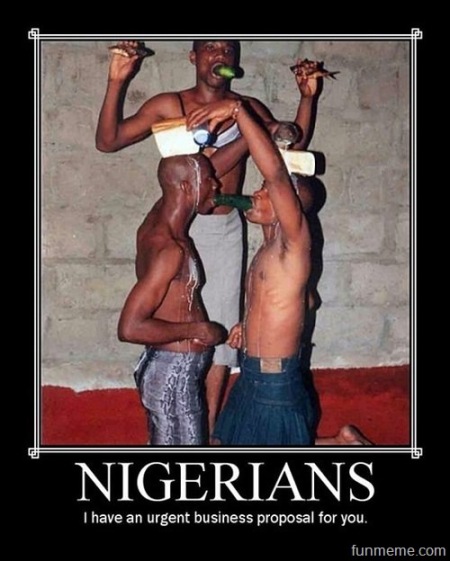 I get these invitations to be fleeced via email all the time. Now they’re coming to my phone via SMS.

Presumably the people who go to the trouble to send these messages must do their sums and come to the conclusion that it is worth while to go to the expense of sending out ‘x’ messages with the expectation of receiving ‘y’ replies, and at least some of those replying will be gullible enough to be fleeced of the contents of their bank accounts. I have no idea what the scamsters costs are; but I assume that there must be some. Cellphone networks charge something, however minimal to transmit SMS messages; and I suppose that those folk who operate spambots do not do it from altruistic motives.

It must be noted that these scams are merely an extreme form of advertising. We are bombarded by adverts all day, every day that make assertions that are unverifiable and in all likelihood untrue. “Nine out of ten dentists recommend ‘Sludgey’!” Which ten dentists did you ask? And what did the tenth one think was wrong with Sludgey?

So what sort of person responds to these messages with the expectation of receiving something for nothing? What psychology could possibly lead a person to imagine that he has been singled out by Bill Gates or the Director General of the United Nations to receive mind-bogglingly vast sums of money? Especially when those worthies write from hotmail accounts? They must be either extremely gullible, extremely egotistical, or simply have no coherent idea of how the world works.

The answer might lie in something the psychologists call ‘locus of control.’ It seems that there are personality types that believe that they are not in control of events that effect their lives–their locus of control is external, and stuff just ‘happens to them’–and others who believe that they are in control of their own destinies;[1] i.e. they have an internal locus of control. The former group are far more likely to believe in ESP, gods, life after death, &c., than the latter group. Also, they are far more likely to believe that the widow of the Grand Poobah of Baghdad has singled them out to share her fortune, despite the fact that they have never even heard of that majestic personage.

It seems that the location of the locus of control is not determined by intelligence; people who sport high IQs could well have an external locus of control, and vice versa. The key, it has been discovered,[2] lies in the degree of uncertainty with which people perceive the environment in which they live. For example, if one has not been educated in the basic physics of electricity and how it pertains to thunderstorms, one might be tempted to attribute a lightning flash to a malevolent deity; but a person armed with a naturalistic explanation, even if it is wrong, will be able to separate the phenomenon of lightning from themselves, and not impute malevolence to it.

If, therefore, we were to educate our children in critical thinking, in recognising that the world works according to certain laws and is not unpredictable, they will be less likely to fall for scams such as this. However, this will not occur while the entire education system is geared to the rote learning of trivial ‘facts’ for the purpose of passing exams. We need to teach them right from the beginning how to tell fact from fiction and how to assess the likelihood of any particular proposition being true. This will allow them to take control of their own destinies, and avoid being ripped off by scams and advertisers.

This entry was posted on Tuesday, August 13th, 2013 at 15:00 and is filed under Education, Psychology, Scams. You can follow any responses to this entry through the RSS 2.0 feed. You can leave a response, or trackback from your own site.