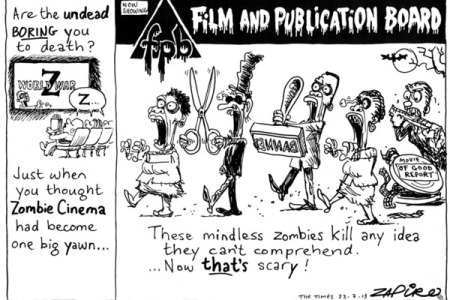 I have written elsewhere about the idiotic antics of the South African Film and Publications Board. On that occasion they had seen fit to place an 18 year age restriction on a painting that was neither a film nor a publication; this time they have effectively banned a film as ‘child pornography’ when it depicts no children, and is evidently not pornography by any accepted definition of the term.

The film in question is “Of Good Report.” It is said to be (I haven’t seen it–that would be illegal–so I must take the producer’s word for it) a serious drama focussing on the phenomenon of ‘sugar-daddyism’. The film opens with a high school teacher meeting a young woman in a bar. He is attracted to her, but the next day she walks into his classroom as one of his students, which, needless to say, complicates matters. The actress who plays the part of the young woman is 23 years old, and the character she portrays is 16. the age of consent in South Africa is 16, so any sex between them in the film is sex between consenting adults.

The definition of ‘pornography’ is open to debate, but the generally accepted definition is that it must be calculated and intended to arouse or titillate, but the actors in this film didn’t even get their kit off:–

when the characters go home, they’re fully clothed. He puts his head under her skirt. It’s obvious he’s going down on her. In the festival there are much more explicit things being shown, and on TV as well. When people watch this film they’re going to wonder what all the fuss is about.
Michael Auret, Producer

Another thing to consider is that child pornography is illegal in South Africa, and carries severe sentences for those convicted of it. If the FPB thinks there has been an offence, then they should report it to the police, and have the offenders arrested and tried. Of course, they won’t do that because they know perfectly well that no crime has been committed; they banned this film because it offended their delicate sensibilities; but that is not an allowable reason to stifle freedom of expression.

It seems to me that this act of censorship comes from an authoritarian perspective that is uncomfortable with the some of the more disturbing aspects of day to day life in South Africa. The film is indeed very real but is in no way pornographic.

I am personally deeply saddened and a little heartbroken because this is a remarkable film from a gifted director who is telling stories in his own voice, and the South African public deserves to be able to see it.
Peter Machen, Manager, Durban International Film Festival

This entry was posted on Friday, July 26th, 2013 at 15:00 and is filed under Art, Law, Libertarian. You can follow any responses to this entry through the RSS 2.0 feed. You can leave a response, or trackback from your own site.