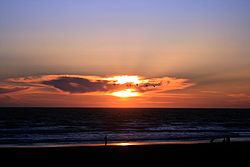 I am not a scientist. In fact I have no degrees of any kind (except the Ph.D. I downloaded from the internet and which looks lovely on my office wall next to Dufus’s rabies vaccination certificate). I therefore have to trust what scientists tell me about their research. I have been following the research into climate change in general, and anthropogenic global warming (hereinafter referred to as AGW) with keen interest.

When AGW was first suggested I was, properly, sceptical. The evidence that atmospheric CO2 levels were increasing was incontrovertible; it was and is an objective fact, but the controversy lay in the effect increasing CO2 levels would have on global climate. Some scientists hypothesised that the increased CO2 concentration in the atmosphere would act like a blanket and increase atmospheric temperatures globally. The political left seized on AGW as a convenient club with which to lambast the things they despise: Big Business and the Nasty Capitalist West. Since then it has become increasingly difficult to separate the political from the scientific.

As time went by it seemed that the AGW proponents were winning the debate; the science seemed solid even though they invited suspicion by always prefacing their arguments with a claim that the debate was over, and that all sane people agreed with them. Writers like Lomborg in The Sceptical Environmentalist disagreed, and I could not believe the vituperative passion with which his arguments were met–real scientists do not froth at the mouth and wax hysterical when someone disagrees with them. A holder of a minority opinion is not necessarily a crackpot.

Of course there were ridiculous arguments from the other side as well. The usual army of nut jobs and conspiracy theorists crawled out of the woodwork to claim, bizarrely, that AGW was dreamed up by the oil companies to ensure that they received funding for research into alternative energy sources that would allow their survival after the oil ran out, or that it was a US government conspiracy to save the power grids from failing due to excessive electricity consumption. And so on.

The real problem with AGW theory is that there is only one experiment that can reliably test whether or not its predictions are true, and that is the real-time one in which we are all taking part. By the time the results are known, it is too late to take remedial steps if the theory is vindicated. Other experiments take place in model environments which are acknowledged, even by their architects, to be deeply flawed. Not enough is known about atmospheric dynamics to construct accurate models, and we don’t have sufficiently powerful computers to run the models even if we could construct them.

And now this. Emails and other data retrieved by a hacker from servers at the Climate Research Unit at the University of East Anglia show that some of the leading climate researchers have systematically “massaged” data to fit their theories, perverted the peer review process to silence criticism, and failed to release the raw data for review by claiming copyright over it. You may think, as I did, that the University of East Anglia is hardly a Harvard, or Oxford, or University of Cape Town, and that this is therefore a storm in a teacup, but the truth is that the UEA Climate Research Unit is a major supplier of data to the International Panel on Climate Change (IPCC), the UN body that is responsible for the climate circus playing out in Copenhagen, and before that in Kyoto and Johannesburg.

So where do we go from here? Just because some scientists have, perhaps, used unethical practices does not prove them wrong, just as an invalid argument can have a true conclusion. Even if they are wrong there are still compelling reasons to pretend that they are right and cut down on the pollution we pump daily into our atmosphere and water. What sane person would prefer to breathe dirty air over clean, or have toxins in his drinking water? But what will cleaning up our act cost? We cannot sustain our population without mechanized, industrial agriculture which relies on fossil fuels; fertilizers require oil for their manufacture; food must be transported in bulk to the cities where people live, which is impossible without trucks, ships and trains, all of which rely on fossil fuels and pump CO2 into the atmosphere; the people in the cities must work in order to pay for food, which requires power in the form of electricity which is mostly generated by the burning of fossil fuels. In short, our species will suffer a population collapse (with attendent misery and violence as people fight each other for dwindling resources) if it were suddenly deprived of the energy sources provided by fossil fuels. Alternative sources such as nuclear, hydroelectric, wind and solar can only provide, with current technology, a fraction of our needs.

Another consequence of this scandal is that the man in the street will lose faith in the integrity of science. Once he thinks scientists have been guilty of crying wolf and playing fast and loose with the facts, he will take everything they say in future with a pinch of salt. He will accord them the same (or less) credibility than his priest or sangoma, which would be disastrous. We must come clean now. I call on the CRU to release the raw climate data and the source code of their climate models immediately, so their conclusions can be independently verified.