If art is to nourish the roots of our culture, society must set the artist free to follow his vision wherever it takes him.
John F. Kennedy

A week or two ago I wrote about my “blind spot” with reference to the visual arts in general and, in particular, The Scream by Edvard Munch. Now a very different painting has been dominating the news, not because of the absurd price it commanded,–it sold for a modest $16,000–but because it depicted the President of South Africa, Jacob Zuma, with his penis hanging out of his trousers.

The Spear would probably not have been in the news at all were the South African government not as ignorant of the Streisand effect as they are of constitutional law, philosophy, civics, economics, geography, democracy and science. They brought suit in the High Court seeking an injunction against the painting being displayed in the Goodman Gallery, or on the website of a newspaper, the City Press. Their grounds are that the painting is disrespectful and impairs the President’s constitutional right to dignity. The case will be heard today, but the outcome is moot because the image is now hosted on thousands of websites worldwide. Oh, hell, let’s make it one more:–

END_OF_DOCUMENT_TOKEN_TO_BE_REPLACED

In June 1999 Kevin Duncan was brutally bludgeoned to death with a hockey stick on Ou Kaapse Weg in Cape Town. The motive for the crime was road rage. Last month a cyclist lost his life when he was struck by a car that had been forced off the road by an enraged taxi driver. 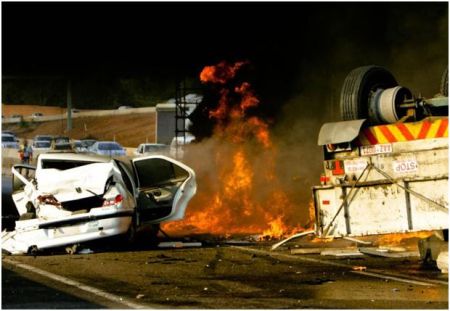 A survey conducted by market research company Synovate in 2005 showed that South Africa has the worst record of road rage incidents amongst the 10 countries sampled, and indications are that we are becoming worse. Causes of road rage are ascribed to the “me first” mindset of South African drivers, congestion on our roads leading to frazzled nerves, lack of enforcement of traffic rules, and poor training of learner drivers.
END_OF_DOCUMENT_TOKEN_TO_BE_REPLACED

I have said before that I have a blind spot when it comes to the visual arts. I just can’t get excited about viewing a painting. Poetry or music can move me to tears, but a painting is just there to break up an expanse of blank wall. Now I’m sure that the fault lies with me, not the artists, and that those who love paintings do so genuinely. But can a work that looks–to me, at least–as though it was perpetrated by a talented seven-year-old with his new box of crayons really be worth $120 million?

That’s the price realised at a Sotheby’s auction for Edvard Munch’s The Scream. I should say one of them, because he painted four pictures with the same title. Just to give some perspective on the preposterous price paid for this work: the same sum could build a brand new container ship equipped with a full suit of containers; it could buy 46 Bugatti Veryons, the most expensive car in the world, with change left over for a few cases of Pol Roger vintage champagne to drink in them; it could pay 66,667 thirld world workers for an entire year.
END_OF_DOCUMENT_TOKEN_TO_BE_REPLACED