I’m somewhat mystified by this article in the New Scientist. A British Aerospace Jetstream aircraft flew from Lancashire to Inverness in Scotland controlled for part of its journey from the ground. 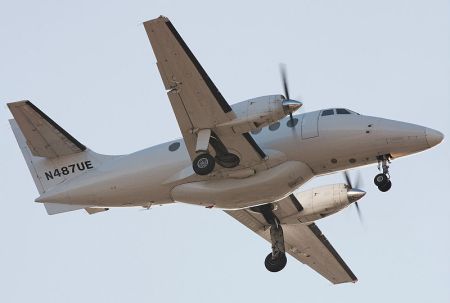 So what? None of the technology described is new, at least not in concept; and modern commercial airliners are flown by the autopilot most of the time anyway. If you are going to have a pilot, what is the advantage of having him on the ground instead of in the plane? In the case of military drones there is the obvious advantage of the pilot not being killed when the plane comes under enemy fire, and the drone can be designed to be smaller than would be required to carry a human pilot; but commercial airliners are altogether a different kettle of fish.

There are lots of them, for a start. According to flightaware.com there were 72,910 commercial flight arrivals in the 24 hours prior to this being written. Skies around major airports are stiff with aeroplanes, and air traffic controllers are sometimes hard-pressed to prevent them bumping into each other. The flight referred to in the New Scientist article was equipped with ‘detect-and-avoid’ technology to enable—in theory at least—a pilotless aircraft to share airspace with piloted commercial aircraft. This is not new, either. Commercial aircraft carry TCAS (Traffic Collision Avoidance System) which warns the pilot of impending collision, and advises him on the action he should take to avoid it. It seems a short step to get the TCAS to take the avoiding action itself.

Is the goal of this research to have unpiloted commercial flights? The airline that first schedules such a flight might find that it departs empty. I, for one, would not bet my life on the technology working flawlessly; I would want a pilot made of meat sitting in the front, ready to take over should the computers go tits-up, which they surely will, eventually, or almost immediately if they are running Windows.

Over-reliance on technology is dangerous. We were looking at yachts at the boat show a couple of months ago, and I complained to one exhibitor that the chart table on his yacht was too small for a standard chart. He gave me a scornful look and said “What do you want paper charts for? It’s all electronic, like, man, the boat comes with electronic charts of all the navigable waters in the whole, like, you know, world.” OK, call me a Luddite, but I won’t go to sea without charts, a sextant, nautical almanac, Burton’s (or Norie’s) tables, sight reduction tables for air navigation (all seven volumes), admiralty pilots, parallel rules, a pair of dividers and a bunch of 2B pencils. Then, when the powers-that-be decide to switch off the GPS satellite fleet, or my craft suffers a catastrophic loss of electrical power, I’ll still be able to figure out where I am and how to get to where I’m going. If pilotless commercial aircraft become a reality, I predict that the floods of tears that ensue will not end them; we’re too stubborn to go back, even if that’s the sensible thing to do.

This entry was posted on Wednesday, May 15th, 2013 at 14:59 and is filed under Aviation, Science. You can follow any responses to this entry through the RSS 2.0 feed. You can leave a response, or trackback from your own site.