I was driving home from work the other day on the freeway. The radio was tuned to a talk station, but I wasn’t paying attention to it; it was a sort of aural wallpaper burbling away in the background while I was ruminating on a knotty problem I had been trying to solve at work. 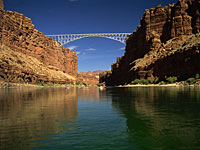 Suddenly I noticed something. The radio went: “Blah, blah, blah, blardy blah blah. All the water in Las Vegas has to be imported into the city by road tanker because Las Vegas is in the desert.”

Despite the fact that I wasn’t actually listening consciously to it, this astonishing statement from the radio had been trapped by my subconscious bullshit detector. I thought that what I had just heard could not possibly be true. I have never been to Las Vegas, but I have seen pictures of it, and have flown over it in my X-plane simulator, and I have watched CSI Las Vegas. All those hotels, all those showers and baths, all those fountains, all those strippers’ homes with swimming pools could not possibly be supplied by water brought in by road. Every route into the city would be thoroughly clogged by water tankers to the extent that there would be room for any other traffic, and water would be more expensive than beer.
END_OF_DOCUMENT_TOKEN_TO_BE_REPLACED

Here is a media release from the City of Cape Town

MEDIA RELEASE
30 AUGUST 2011
Inshore movement of sharks: Safety for the
summer season
The City of Cape Town would once again like to remind all beach and
ocean users that we are approaching the time of year when we expect to
see a seasonal increase in the presence of white sharks in the in-shore
area.

This seasonal change is not unique to False Bay or recent in its
occurrence. Similar behaviour is recorded in Gansbaai, Mossel Bay and
even California.

Shark sightings recorded by the shark spotters have consistently shown a
seasonal peak during the period from August to March, peaking in mid-
summer. Typically shark sightings start in late August. However, shark
spotters and water users have recorded early sightings in the last two
weeks in Muizenberg, St. James and Clovelly.

White shark research trips over the weekend recorded a significant drop
in shark activity at Seal Island, indicative of the seasonal move of sharks
away from the island to the in-shore areas. The City is therefore
appealing to all beach and ocean users to be aware of these recent
sightings and the expected increase in shark presence in the in-shore
area over the summer months.

I was walking the dog on Muizenberg beach the other day when the sirens sounded and the white flag was raised. (Why white? I would have thought red would be better.) Most of the surfers and bathers left the water, but a few ignored the warning and stayed in the surf. They were fortunate they weren’t eaten.

Yesterday, a similar thing happened at Fish Hoek on the Clovelly end of the beach. Sirens, flags, but one person, Mr Michael Cohen, chose to ignore them. He wasn’t as lucky as his foolhardy fellows in Muizenberg, and he is now in the Constantiaberg Clinic with his right leg considerably shorter than the left.
END_OF_DOCUMENT_TOKEN_TO_BE_REPLACED