Every day I receive in my inbox a financial newsletter which tells me what’s going to happen in global markets and where I should most profitably be investing my non-existent wealth.  Usually I read it avidly, dreaming of yachts and private jets, and skip impatiently past the blue advertising links embedded at various points in the text.  But yesterday was a slow day, and I clicked on a link because it contained the phrase “nano-technology” and I love all things scientific and technological.

What a shock!  It seems we are all about to be consumed by flesh-eating bacteria!  Medicine is powerless!  A worldwide conspiracy of government glitteratis has succeeded in keeping this secret from us, but now it is out.  But do not despair!  In a message that begins “Dear Germ-Conscious Friend” salvation is promised.  It comes in the form of a device that appears to be no bigger than a cellphone and is catchily called the New Nano UV Disinfectant Light Scanner.

This amazing little device kills an incredible 99.99% of bacteria and viruses in ten seconds flat!  Now I know that 93% of statistics are made up, but this surely looks as though it might be true?  Any lingering doubts are dispelled when we are informed that this “proven, working technology” has been tested and given certification by independent laboratories. 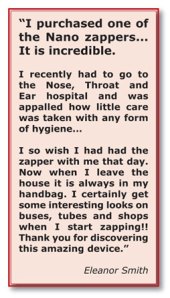 I read avidly on, because I still haven’t got to the bit where the “nano” comes in.  It seems a person called Eleanor Smith has purchased one of these doohickies and is delighted, her testimonial is above, unless it comes out below.  Still haven’t got to the nano nitty-gritty yet, but here’s a relief: it’s 100% chemical free!  I wonder what it could be made of?  Here’s a picture (above or below) that constitutes absolute proof that this thing is on the up-and-up.  I do wish they would put the “order” button at the top of the page—I could already have had one instead of still stupidly risking my life amongst all these horrible ravenous “E. Coli” and “C. Difficile”. 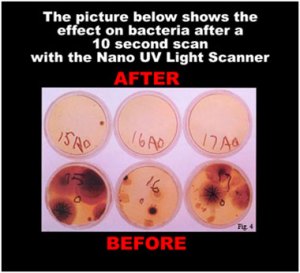 I get to the bottom, and still no explanation of the “nano”.  Just this: “Now, using state of the art nano technology and multi-wavelengths including UVA-, UVB- and UVC-light…”  Is it possible?  No, surely they wouldn’t be so base as to use a scientific term to hoodwink, would they?  That’s what “quantum” was invented for.  If only they’d said: “in a revolutionary new application of quantum entanglement this device will provide 100% protection against being run over by buses or hit upside the head by falling meteorites” I would have smelled a rat immediately.  Cunning rascals; we’d better have a sceptic take a closer look at their claims.

“By Jove, Holmes, look at this photograph!  It’s obvious this thing has utterly destroyed these germ colonies.”

His lips stretched in a sardononic grin and his ice-blue eyes glittering, Holmes whipped out his magnifier and examined the photograph closely.  “You notice, Watson, that the hand-written labels on the bottom row of Petri dishes labelled ‘before’ do not appear to match those on the top row, labelled ‘after’.  The formation of the characters is quite different.”

“Gosh!  You’re right, Holmes.  So this light effects handwriting as well as killing germs!  That is astonishing!”

“Would a better explanation not be that they are not the same Petri dishes?”

“But that would mean…”  Watson tottered, his face ashen.

“Precisely, my dear Watson.  These miscreants are using a new technique we detectives call ‘lying’.  It consists of deliberately misrepresenting facts in order to cause their victims to believe things which are not true.”

“God, what can the world be coming to?”

Why not just take a photograph of a virgin petri dish, then grow bacteria in it, take another photograph then lie about which one was taken first?  That’s the way I’d do it.

There is so much else wrong with this advert that it is hard to know where to start critisising it.  There is the same ignorance of how to render biological names that I have complained about in another context; there is the typical scare tactic followed by the ‘white knight’ in his lab coat riding to the rescue; the appeal to authority (certificates and accreditation, for what? It doesn’t say, possibly for being safe to use in submarines); the use of scientific-sounding jargon which the ignorant lap up like ambrosia.  And on and on.

Does this thing cause harm, though?  Probably not, unless you shine it in your eyes for too long, or eat it, or poke it into bodily orifices.  If the Eleanor Smiths of the world derive comfort from it and are prepared to part with R699.95…WHAT?!  This thing probably doesn’t cost more than ten bucks to make.  They’ve made me use an interrobang I’m so gobsmacked.  Oh, wait, they give you a couple of free batteries as well.  That’s OK, then.

Is it wrong to poke fun at or make money out of the idiots who infest this planet?  After all, it’s not their fault they’re fools.  Nope, if you can’t be bothered to think, you will get what you deserve, which is your money taken, and perhaps a dose of C. difficile as well, whatever that might be.

This entry was posted on Friday, October 9th, 2009 at 07:03 and is filed under Uncategorized. You can follow any responses to this entry through the RSS 2.0 feed. You can leave a response, or trackback from your own site.

One Response to Nano Nonsense