A couple of weeks ago Jack Kevorkian, a.k.a. “Doctor Death”, died from complications of liver cancer. Today we have news that Terry Pratchett, the esteemed science fiction author of the Discworld series, is suffering from early onset Alzheimer’s disease, and is campaigning for the right to end his life when and where he likes. 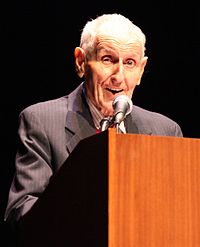 Well, why shouldn’t he? There seem to be two arguments against any individual choosing the time and manner of his own death: religious, and some variant or other of the “slippery slope”.

The religious argument is simple: only God can ordain the time of our death, and to pre-empt God is a mortal sin. Also inextricably tied into this argument is the notion that humans are fundamentally different to animals by virtue of the possession of a soul, and that what might be “humane” for animals must be rejected for humans on account of our special status.

The slippery slope arguments come in two broad categories. The first goes something like this: “If we allow people who are terminally ill to commit assisted suicide, then we’ll have people doing it who are just depressed or having a bad day.” The second is usually framed as the concern that relatives of the euthanasee might take the opportunity to bump off granny in order to get their avaricious hands on her chattels before she is ready to go, or that granny may feel she’s a burden to her family, so she undergoes assisted suicide as a considerate means of relieving that perceived burden.

I side with Kevorkian and Pratchett in this matter. Neither of the arguments mentioned above hold water, and even if they did they are trumped by a much more compelling moral argument.

The religious wish to impose the sovereignty of their god on everyone, whether or not they believe in that particular god. I do not believe in the existence of any gods, so obviously I must reject as absurd any attempt on the part of the religionists to impose their superstitions on any aspect of my life; and I must oppose as unconstitutional any laws that entrench religious ideals. I find the very notion that we assist animals to die painlessly when their pain becomes severe and call that “humane”, but refuse that same consideration to humans contrary to every tenet of morality, but that does not surprise me–the religious know very little about morality, and what they do know is distorted by the lens of their hand-me-down beliefs.

Slippery slope arguments can be disposed of quite easily simply by exposing the fact that they are straw men; they are objecting to matters that are not even on the table–no one is espousing murder, merely individual freedom of choice.

Which brings us to the clinching, in my view, moral argument. If we value the “right to life” as entrenched in the constitution, then we must acknowledge the concept of ownership of one’s life and body. Who owns your life and body? The church? Your neighbour? The state? Obviously not. You own it, and therefore you must be the sole arbiter of its final disposition. The corollary to this is that any law that attempts to prevent you from exercising your rights over your body is immoral and should be struck from the statute books, and the prosecution of those assisting others to die should be stopped immediately.

I see that the Catholic church saw it as “both ironic and tragic” that Jack Kevorkian did not himself resort to assisted suicide in his final days. Why? They miss the point entirely. He did not choose to do so, but he should have permitted to so choose if he wished. The religionists really don’t seem to able to get a handle on the logic of this argument at all.