I think I’ve have stated in the past that I’d rather rip out my own eyeballs rather than attend a church service, but I didn’t really mean it literally. 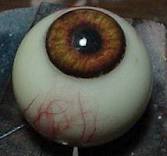 Mr Aldo Bianchini, however, is made of sterner stuff. Perhaps the sermon was of such spine-liquefying boredom, or the stench of the pious became impossible to stomach, or he suddenly realised he had devoted half a lifetime to believing hogwash, but he actually did rip his eyeballs out during a service in northern Italy.

Blood poured copiously from his vacant sockets, paramedics were summoned, and, no doubt, prayers were offered. At the hospital, doctors attempted to cram the eyeballs back into their sockets, but it was like trying to stuff toothpaste back into its tube. Poor Mr Bianchini will be blind for the rest of his life.

Dr Gino Barbacci, one of the doctors at the hospital, said “He was in a great deal of agony and he was covered in blood. He said that he had used his bare hands to gouge out his eye balls after hearing voices telling him to do so.”

Ah, that explains it then. Voices told him to do it. I remember when I was a child and I had done something stupid I would use the excuse that I had been told to do it. My mother would say, “if they told you to jump in the lake would you do it?” I always said no, but perhaps, in my religious period–from about the age of ten to thirteen–I might have, especially if I thought the voice was the Voice of the Lord.

Religion and mental illness (is the former a subset of the latter?) share the gold medal for causing Mr Bianchini’s plight. When rational thought is removed from human existence, some horrible consequences can ensue. What would you have done if you were the presiding priest on this grisly occasion? Abandoned the service? Me too. But not Father Lorenzo Tanganelli. He carried on regardless and complained, “I carried on celebrating Mass but a lot of people had left because they were so shocked by what they had seen. I have never seen as much blood as I saw today.” The nuttiness is truly surreal.

This entry was posted on Wednesday, October 5th, 2011 at 10:54 and is filed under religion. You can follow any responses to this entry through the RSS 2.0 feed. You can leave a response, or trackback from your own site.