Shortly before midnight on March 2nd last year a Molotov cocktail was was hurled through the window of a house in the Western Cape. The resulting fire killed 22 year-old Yalezwa Phulwana and her 2 year-old daughter Liyema. Yalezwa’s two sisters managed to escape the burning house unharmed, but their mother, Nonjengezinye Matwa, was severely burned and hospitalized.

Two men, Kwanele James and Mzuvukile Thoswa, 24 and 25 years old respectively, were arrested and charged with murder, attempted murder, arson and three contraventions of the Suppression of Witchcraft Act of 1957. The reason for these latter charges is that Kwanele James’ mother had recently died, and a sangoma had told him that Nonjengezinye Matwa was a witch and had caused the death of his mother, providing the motive for the arson attack.

Well, I had no idea that such a law existed. Interested in learning what the law actually says, I searched for it on the Department of Justice web site, but found that it is not available for download, and is only obtainable by paying a stiff fee on a commercial website (or schlepping off to the DoJ and getting a hard copy of the Government Gazette, also at a non-trivial cost). There are some free download sites, but none that I have found are comprehensive; certainly none have this piece of legislation available.

To harp boringly on about how much harm irrational beliefs cause would just be depressing, so I won’t do it. Instead, I’m going to harp boringly on about how the hell a citizen is expected to obey the law when he can’t even find out what it says? “Ignorance of the law is no excuse”, but how is the average Joe to overcome his ignorance? And could the obscurity of the law really not be a defence in court? I have googled (although not binged) diligently in an attempt to find out just how many laws are currently on the South African statute books, but the only answer I can come up with is “very, very many”. Far too many for any citizen to have even a vague idea of what they are and what they allow or forbid. I suspect that most of these laws are moribund, in that they are not enforced or known about even by legal professionals. If I am right, isn’t it high time we had a vigorous brush-clearing of the statute books; get rid of the dead wood and allow the light to shine through and illuminate the laws that are useful? 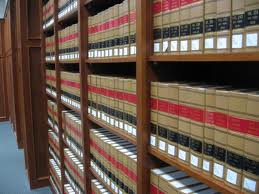 And I have a brilliant idea for keeping superfluous laws off the statute books: carve each Act onto a stone tablet and make legislators carry a copy of them in a backpack wherever they go. When they make a new law, their burden becomes heavier; when they repeal a law, they get that much lighter.

Soon even ordinary people will know where they stand in terms of the law and there will be no need for so many lawyers.

This entry was posted on Friday, January 28th, 2011 at 12:10 and is filed under Law. You can follow any responses to this entry through the RSS 2.0 feed. You can leave a response, or trackback from your own site.